February 04, 2015
My children definitely have a teacher for a mother and I love sharing stories about their school experiences and how they act those out at home. Last week, as I prepared to leave to teach a class at the University, I took out the large post-it note pad from the closet. My 7 year old was instantly intrigued and asked for a piece to “make something”. This kind of request is quite typical for my son who wants to write like Mo Willems when he grows up, so I happily gave him the piece and wondered what he would draw.

A few minutes later, I checked came back to view his creation and was quite surprised to find out that he did not create a drawing, but an anchor chart instead! Here is what I found: 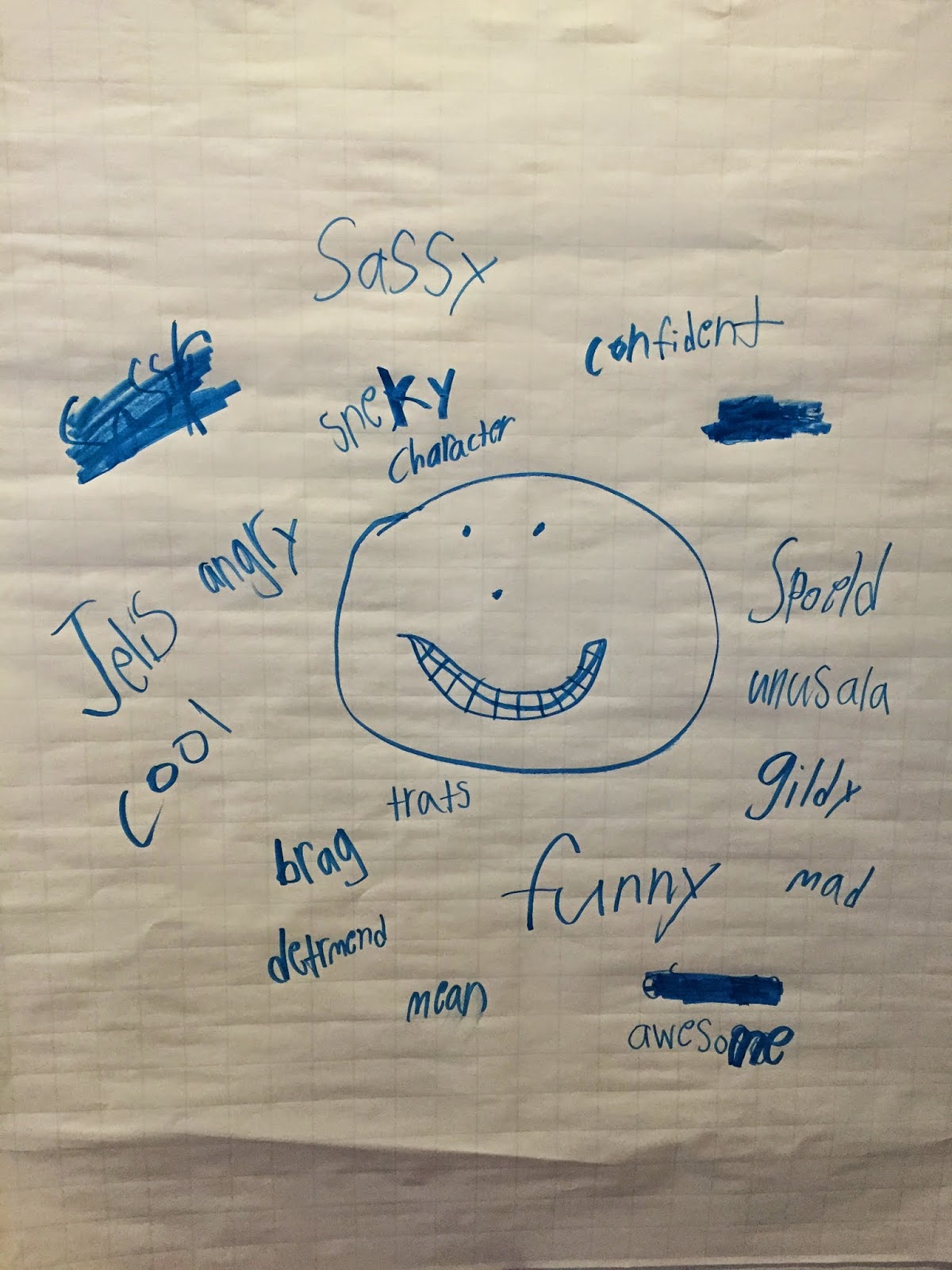 Smiling, he told me how we meet characters in books and they all have traits that make them special. Since the chart paper reminded him of school, he wanted to make a “school chart” instead of a drawing. We talked about all of the traits he had listed and his twin sister joined the conversation, adding a few of her own. We talked about our favorite characters and our favorite traits and had a great conversation before leaving for school and work. What a proud Mom and teacher I was!

Obviously, the idea of character traits was something that was important to him and helped his comprehension as a reader and the connections he was making to characters and texts. Ironically, that same week, I talked with a 7th/8th grade English teacher and we discussed how to teach character traits using text evidence in a way that was more engaging than the NYS Expeditionary Learning modules recommended. We decided to create character x-rays using quotes and evidence from the book to form conclusions about the characters we were reading about. I thought I would share our ideas here and give you a template I created for an elementary lesson on character traits and showcase the pictures of the life-size x-rays from her classroom in case you would like to try it.

First, if you are interested in the ideas of character x-rays, be sure to read the article written by Pamela Jewett about them here: http://www.childrensliteratureassembly.org/docs/pamela-jewett-article.pdf
To begin, talk with students about external and internal character traits, how they differ and connect together. Show the blank character x-ray as a visual graphic. 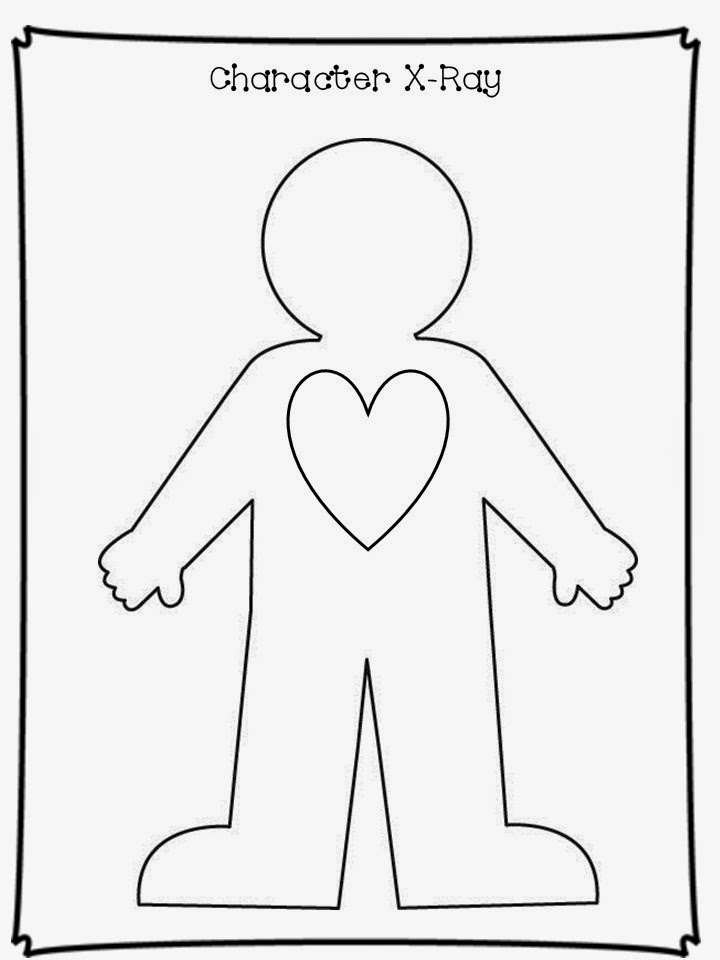 Project the character x-ray on the Smartboard or give one to every student. Choose a character in a text that you are reading and search through the book for evidence of the external characteristics: age, nationality, physical traits, events in the text, etc.. You can choose to have students write the traits on the outside of the x-ray or write the sentence the trait was found in to work with text evidence in the upper grades. Once complete, have a discussion about how those external traits impact the character’s personality and their response to the events in the text (a Common Core standard focused on heavily in the NYS ELA assessment). Write the inferred inner character traits in the inside of the heart and body.

If you really want to go big like Jennifer Sheerer’s classroom, have students trace their bodies on large pieces of butcher paper and use that as a graphic organizer, rather than the template. Students can work in small groups to collaborate and engage with text evidence, charting their findings for the class. Here are some pictures of the projects in action. Students worked in small groups to create character x-ray of Atticus from To Kill A Mockingbird.

I hope this gives you some additional resources for approaching character analysis. As any reader knows, meeting new characters is like meeting new friends and we build connections that can last a lifetime of reading!

Popular posts from this blog

November 02, 2018
I have a thing for notebooks. And colorful markers. And sticky notes. I use them in all aspects of my literacy teaching and coaching. During coaching conversations, I often find myself providing on-the-spot demonstrations with these tools. I might engage teachers in a brief lesson on phonemic awareness and ask them to sort sounds. I might walk teachers through word building activities so they experience a new way of engaging students. I might introduce books to teachers to model how they might do the same for their students. I might even create game boards on sticky notes as visuals for teachers to support instructional planning. These demonstrations and notes act as instant and tangible tools to further teacher learning.
Over the years, I’ve compiled these artifacts to create coaching toolkits for the teachers I work with. My toolkit for ‘word work’ might include a picture of an anchor chart created with students, a list of words appropriate to the alphabetic feature students are wor…
Post a Comment
Read more

August 21, 2019
This summer, I vowed to be intentional in how I spent my time so that when the new school year arrived, I would feel refreshed and renewed. Admittedly, the summer seemed to fly by, but I did carve out time for my own professional learning. I read every day, I wrote in my notebook (almost) daily, tried my hand at gardening, spent time with my kids and just tried to get better at being me. Some days, I killed it. And other days, well….you know. So, as I head into another school year, I know that I need to be incredibly intentional in how I spend my time and ensure that I focus on my own learning as an educator. It is this learning that fuels my work: it lifts my reading spirits, fuels my writing heart and reminds me that leading the learning of others requires that I remain a continual learner myself.
It is this core belief that drives my teaching, coaching and leading this year. I am even more committed to my own professional learning to fuel my work and lead by example. I have purpose…
Post a Comment
Read more

As an Amazon Associate, I earn from qualifying purchases.